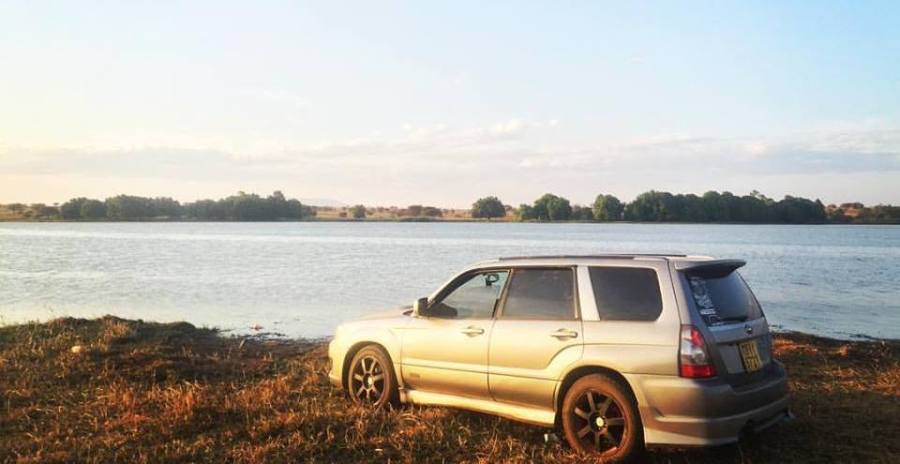 Our road trip through Tanzania was one of the best trips I’ve ever taken, and nearly the most adventurous thing I have done thus far in my life. It’s also the most exploring I’ve done of East Africa. And doing it with friends – Imma and Eugene – gave us the motivation to keep going, because it was one heck of a long drive! Discovering Tanzania was long overdue and it couldn’t have been done better.

The trip began at 4am on October 16, 2016 in Nairobi. We geared up and drove up to Kitengela, where we had a quick stop at a service station for gas, wheel alignment and minor service.

Then we sped off to the Namanga boarder, very exhilarated about the adventure we were about to dive into. There, we got an insurance cover for Nadia (the automobile), entry stamps for ourselves and converted some shillings.

Next we drove on past Longido, into Arusha, Tanzania. First realization; having a Kenyan car number plate in Tanzania is not a good idea. We were stopped several times by annoying policemen who were looking for every fault, not to mention that our car was dirty and thus not visible to other drivers. Really?

I came across my most profound memory of Tanzania in Arusha. Chips mayai and mshikaki for lunch… Delish! This became our meal plan throughout our trip.

On the same day we proceeded to Babati, then Kondoa. We had dinner in “Kondoa Mjini” and travelled on to “Kondoa Shambani” for the night. A quarter of this journey was through a forest, on a dusty marram road. Despite this, the shotgun (co-driver) kept our best tunes flowing… we stayed upbeat, #HighOnLife!

It was midnight already, and 670 kilometers deep, we rested for the night, near Tarangire National Park, and next to Lake Kisaki.

We spent the next day here busking and the sun, watching fishermen and doing a bunch of other stuff.

That evening, we covered another 250 kilometers to the capital city, Dodoma. I quickly realized that the road was so deserted – I guess because it wasn’t much of a road for a large proportion of the way! But it was incredibly beautiful and the journey went well. We touched base at a friends house at midnight, again!

The next morning, we toured the city dubbed Dom. I did not quite understand why they called it the urban district of Tanzania, especially after getting to Dar es Salaam later in the trip. Dodoma ‘city’ is way smaller, reserved and conservative.

It is not easy to take a picture in Dodoma, or in Tanzania for that matter. It is against the law to take pictures of anything without permission, be it a public establishment or anyone in uniform.

Our longest day of driving took us from the middle of Tanzania to the East Coast: Dodoma to Gairo, then Morogoro, then Dar es Salaam, a total of 584 kilometers.

Then, we drove up the East Coast into Kenya: Tanga, then Ukunda, finishing the first phase of our trip in Mombasa, Kenya. A total of 500 kilometers. It was time for vacation! We would spend the Mashujaa Weekend in the Kenyan coast.

Five days later; rested, refreshed and rejuvenated, we were ready to get back to the hustle and bustle of Nairobi.

We drove up from Momabasa to Nairobi via Voi, and Mtito Andei, summing up the total journey at approxiamtely 3,000 kilometers.

And we did it overnight! At 3.30am on October 26, 2016, I dropped off Eugene at his residence and headed home, ready for work the next day.

It is very possible to write about this eventful trip for months and months — but for now, here are the highlights.

Dar isn’t one of Africa’s most beautiful cities; many parts of it are dusty. Yet it’s a vibrant and interesting corner of modern Africa. Colourfully clad people jostle with vehicles and bicycles in the streets, whilst street-stalls sell anything from wooden carvings to matching sets of ‘dira’.

Driving from Dodoma to Dar es Salaam often took us through beautiful scenaries, especially across a certain river. Unfortunately I did not capture any shot, but I must admit the roads in Tanzania are generally magnificent.

Driving out of Mombasa. Lots of overloaded trucks criss crossing, we got into a miner accident at Changamwe Round-about as a result of this and had to spend an extra night in Mombasa. The reality of how poor Kenyans roads are hit us on the journey back to Nairobi.

What I Would Have Done Differently

I think this trip would actually work better in reverse. Mombasa was our final destination-ish, and as lovely and pretty a city as it is, it couldn’t hold a candle to Dar es Salaam.

I also realized that we covered hardly a quarter of the massive country. We should have planned to spend more days and cover a larger region; maybe.

What I Would Not Have Done Differently

We were signed up as three drivers from the start. We arranged to have everyone carry their driving license because of the length of the journey. Honestly, interchanging drivers throughout the trip was quite helpful. It turns out that I vastly prefer navigating to driving at night and Eugene (being the night runner he is) took over the steering wheel when the sun went down. I was happy spending time catching up on work then.

That said, this trip was fairly close to perfect.

Tanzania is a fascinating, beautiful, huge, and a delicious destination. I didn’t expect my own continent to feel so exotic to me — but it did. There were such subtle differences in life, from how outwardly friendly everyone (except the police) was to the common dishes on menus and the unusual sceneries, especially the stupendous Mount Kilimanjaro, Mount Meru and Uluguru Mountains dominating the Savannah.

If you’re going to explore Eastern Africa, a road trip is the way to go. It gives you so much flexibility and the option to explore both urban and rural regions on your own schedule. I couldn’t imagine doing it any other way.

My Tweets
Join 4,798 other subscribers
Follow teshmbaabu on WordPress.com